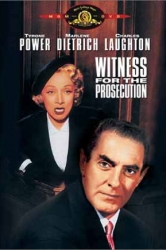 "Witness for the Prosecution” directed by Billy Wilder

“An unbeatable plot framework written for the stage by Agatha Christie and a warm, witty character description by Billy Wilder gave birth to 1958's Witness for the Prosecution, a classic thriller with the genius of a master. of comedy."

Taken from The country.

Based on the story and play by Agatha Christie

Authorized for all audiences