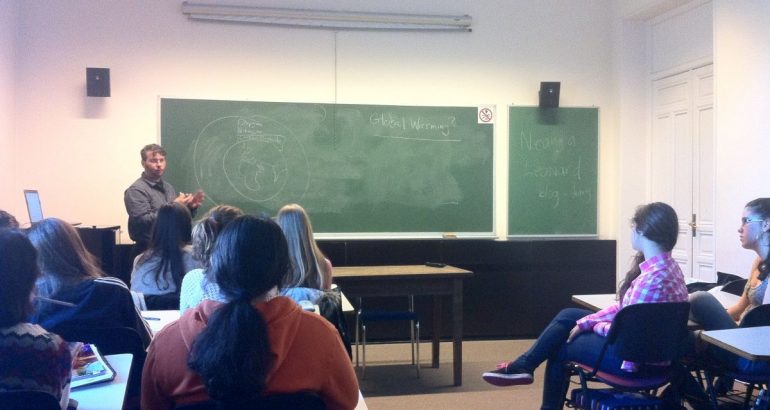 Last week, an anthropologist named Neahga Leonard gave us a talk about his life experiences living and working abroad.

He was born and raised in Northern California , where he was always surrounded by nature. Ever since he was a little boy, he liked climbing trees, going on hikes, etc.  When he got older, he decided to study something related to ecology. He earned a master’s degree in anthropology and when he finished, he travelled to Alaska to study the movements of the glaciers. While there, he would put a stake in the ice to see how much it moved from one week to the next. Later on, he went to South America to work on a project to protect bears, which were endangered because a lot of farmers killed them because they ate their harvests. A lot of people helped and when the project was successfully completed, he started working on another project in Asia. He lived in China for a while. The last project he took part in fell through. He had planned to live in Indonesia, but he ended up coming to Madrid to visit and he is currently searching for a new job opportunity.

Throughout his adventures he has had some really exciting experiences. The project that we found most interesting was the one with the bears and he told us some stories that happened there. One time he had to put a tracking collar on a bear to follow its movements. Another time, when he was asleep, he heard something scratching at his tent and he realized it was a bear when it scratched his shoulder.

Neahga loves our planet and he told us that in every single place on Earth you can find something interesting.