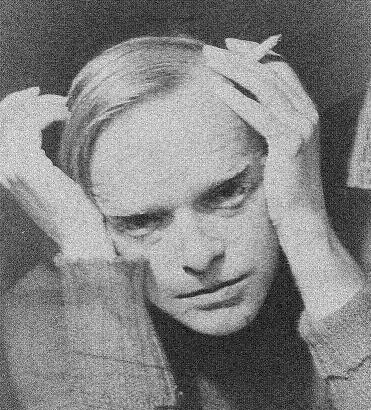 THE STORY OF THE MONTH ANALYSIS: “MIRIAM” BY TRUMAN CAPOTE

Our story for December, Truman Capote’s “Miriam” (1945), is disquietingly similar to our story from November, Charlotte Perkins Gilman’s “The Yellow Wallpaper.”  Once again, we, as readers, are invited into an uncomfortable space inhabited by characters who may or may not be figments of the imagination.  Once again, we become witnesses to the ways in which the power of emotion drives the story to its dramatic end.  And once again, we must consider the delicate relationship between reality and fantasy, between things that can be described through actions, and things that can only be perceived or intuited, but never quite articulated through words.

There is, however, a crucial difference between these two stories.  Gilman’s story has its origins in her own lived experience; she captures the horror of that experience, that reality, and transforms it into a compelling fantasy.  By contrast, Capote’s story has its origins in fantasy, plain and simple.  And yet the fantasy elements of the story are initially hidden from view, obscured by the focus on realism, on the humdrum of everyday existence.  In our discussion of “The Yellow Wallpaper,” we talked about the ways in which many of the details concerning daily life were missing from the story.  Not so in “Miriam,” where there is an almost obsessive focus on the little details of Mrs. H. T. Miller’s life.  But is this focus on the details of everyday life a distraction?  Is Capote trying to shift our attention away from something else that is lurking in the pages, something that will catch us unawares, just as it caught Mrs. Miller ?

“Miriam” is a ghost story, and a rather fantastic one, too.  It conforms brilliantly to the classic features of the genre, most notably in its refusal to offer a rational explanation for any of the irrational or supernatural occurrences.  Ghost stories are often characterized by a feeling of tension that is caused when something familiar inexplicably becomes too familiar, unfamiliar, strange.  As you read, pay close attention to those moments when a feeling of familiarity is immediately followed by a feeling of fear, or when feelings of attraction give way to feelings of repulsion.  There are several of these moments for us to talk about on Tuesday, such as when Mrs. Miller first sees Miriam outside the movie theater, and also later in the story when she sees the old man while out shopping.  Such moments are never explained, and we are left wondering about their meaning and purpose.

Indeed, such passages are important inasmuch as they contribute to an overall sense fear and unease that permeates the story.  Which passages in particular made your spine tingle or gave you goose bumps?  We are perhaps more familiar with the type of ghost story that takes place in a haunted house; why, in your opinion, does Capote set his ghost story in New York City, turning ordinary places such as a movie theater or a flower shop into sites of haunting?

Capote is best known for his long fiction, particularly Breakfast at Tiffany’s, published in 1958, and adapted for the cinema in 1961.  The film adaptation has contributed greatly to the longevity of Capote’s reputation, but don’t be fooled by its glamorous portrait of post-war Manhattan.  Behind the dazzling skyscrapers of Manhattan lurks the presence of the Southern

Gothic; and this is precisely what makes Capote’s short fiction so powerful, even if it isn’t as well-known.  The driving force of Breakfast at Tiffany’s is the darkness contained in its heart: the lonely desperation of its supposedly whimsical protagonist, Holly Golightly.  This desperation, this loneliness, is felt more keenly in “Miriam,” in the solitary life of Mrs. Miller, putting on her galoshes for the rain, heading to the cinema alone, and sharing her peppermint candies with a new friend.  Is it this loneliness, this solitariness, that makes her the target of the ghost-child Miriam’s unnatural interest?  Or is it Mrs. Miller’s desire for company that conjures up Miriam as a terrifying companion, one who will never leave?  Winter is here.  Curl up with the story and a warm drink, and savor the feeling of solitude…it might not last.  Happy reading.