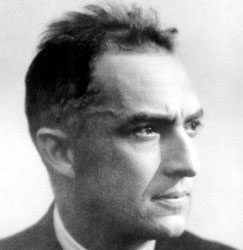 “April,” wrote T.S. Eliot, “is the cruelest month, breeding / Lilacs out of the dead land, mixing / Memory and desire, stirring / Dull roots with spring rain.”  Eliot had his own reasons for taking such a dour view of the season which poets have traditionally celebrated for its associations with fertility and new life.  We, however, have plenty of reasons for celebrating this spring because April is National Poetry Month!  This month will see our last two meetings for the Poetry Reading Group, and we’ll be looking at poems from two great mid-twentieth-century poets: William Carlos Williams and T.S. Eliot.

Throughout our sessions, we’ve drawn attention to the importance of images in poetry.    We’ve talked about the ways in which poets use striking images to transform the ordinary into the extraordinary.  We’ve seen lowly and commonplace things, like goats and rain coats, elevated to new heights as they are offered as tokens of affection to a beloved.  We’ve seen an ordinary bouquet of tulips grow sinister and menacing as the flowers force a patient recovering from surgery to contemplate her own mortality.  Poems use images to communicate profound psychological truths, feelings and experiences that are, paradoxically, often difficult to put into words.  Images have the power to set the scene, awaken memories, and, above all, make us question the world around us, the world we so often take for granted.

Although we might not expect such a short poem to be capable of so much, William Carlos Williams’s “The Red Wheelbarrow” (1923) does all these things and more.  The poem takes about 15 seconds to read and is devoted to a single image: a red wheelbarrow (“wheelbarrow” is “carretilla” in Spanish).  There is little else to focus our attention: we know that it has recently rained, because the wheelbarrow is “glazed” with rainwater, we know that there are some chickens near it, and we know that the chickens are white.  The poem is, in effect, the image.  Or, depending on how you look at it, the image is the poem.

Indeed, Williams’s poem belongs to the Imagist movement of the early- to mid-twentieth century.  Imagist poems are often characterized by a “clarity of expression through the use of precise visual images.”  Imagist poets sought to strip away what they saw as an unnecessary wordiness in poetry, privileging an economy of language and deploring anything other than the exact word to describe the “thing” being described.  Williams shared this belief in the necessity of the simplicity of language above all – he claimed “No ideas but in things” – and his contribution to the movement was to incorporate the uniqueness of the American language into his poems.

If “The Red Wheelbarrow” epitomizes this urge to strip down language in order to get at some simple, essential truth, it is, nonetheless, an elusive poem.  It offers an image but it refuses to give a meaning, and in this way it is almost more like a landscape painting rather than a poem.  This poem has perplexed generations of readers, frustrating high school students and educated scholars alike.  What, exactly, depends upon the red wheelbarrow?  What, if anything, do the white chickens have to do with it?  Why does it matter (does it matter?) that the wheelbarrow is glazed with rainwater?

Perhaps, though, we’re not meant to seek meaning in the poem itself.  Perhaps we’re meant to turn our gaze back onto the language of the poem, onto the language used to describe the things in the poem, onto language itself.  Perhaps we’re meant to reflect on the language we use everyday, and to see that language in its ordinary, everyday form is poetry.  “The Red Wheelbarrow” challenges us not only to really see the everyday, ordinary things around us in a new light, it also challenges us to see that language is one of those everyday, ordinary things, and that we so often take it for granted.  So much depends upon our ability to realize that everyday, everywhere, language is all around us, and it is language that transforms the things of our lives into poetry.

Enjoy the spring rain, and see you on Tuesday.