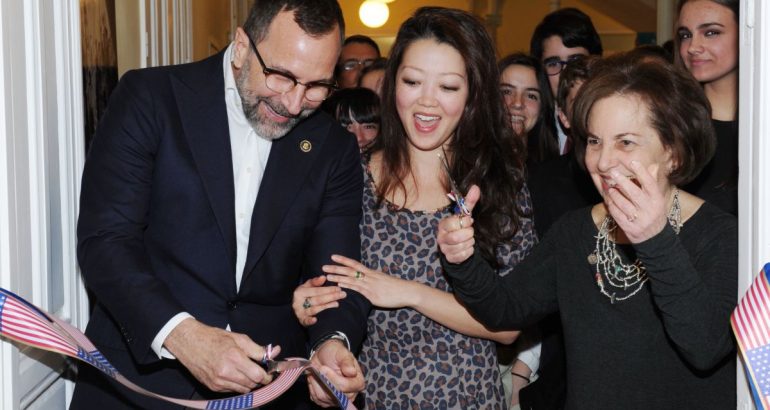 The mounds of snow (at least, most of them) have finally melted in Boston, and Spring has arrived here at last. Spring traditionally brings the promise of new life, and so it is fitting to think about signs of ‘new life’ at the International Institute and about the promise inherent in the Institute itself.

The formal inauguration of the American Space Madrid at the International Institute on March 9, with the participation of James Costos, U.S. Ambassador to Spain and Andorra, hailed one source of new activity at Miguel Ángel, 8. In Madrid for the ceremony and inauguration week events, I found that this collaboration of the International Institute with the U.S. Embassy, Madrid, is adding new vitality to the Institute, even as it embodies the educational and cultural exchange between the U.S. and Spain at the core of the Institute’s mission. The American Space, directed by Jean Choi, is already actively engaged in meeting principal goals of the worldwide American Spaces program: encouraging the teaching and learning of American English; advising Spaniards about study opportunities in the U.S.; cultural programming; promoting activities with alumni of State Department programs like the Fulbright Scholars; and offering general information about the United States. American Space funding is now supporting some of the Institute’s most popular activities, such as the Library Storytelling morning sessions.

As the Board of Directors had hoped, the American Space is bringing new publics to the building. The capacity crowd in the Paraninfo that came to hear Ambassador Costos speak included many, including Spanish high school students, who had never visited the Institute before. The next day, I moderated a panel on “Women Changing the World: Lives in Science and Technology.” This panel, organized by Prof. Martha Gray (MIT) and under her leadership, spoke to the presence of women in fields not often emphasized at the Institute in the past. Over 400 people came to Miguel Ángel, 8 for the science-engineering hackathon the ASM hosted with M+Visión, the MIT-Madrid consortium that Prof. Gray directs. On March 16, the American Space and the Institute joined EducationUSA in sponsoring a University Fair, where representatives of 20 American schools promoted higher education in the U.S. for Spaniards.

To support the increased emphasis on U.S. educational opportunities, the Institute’s English Program, led by Patti Trimborn, is offering SAT preparation and TOEFL classes and has developed a new course in Study Skills for U.S. Universities. The Institute now provides college advising services to Spanish students who wish to apply to American colleges and universities.

The ASM has also added new touches to the Library, which now has additional American children’s books as well as new tablets that can be borrowed by Library users. New activities like the Adult Readers’ Theatre attract new users to our historic Library.

These developments are all aimed at making the Institute a vital place that continues to play a distinctive cultural and educational role in Madrid even as it adapts Institute founder Alice Gordon Gulick’s 19th century vision to the realities of 21st century Spain. New approaches, new initiatives like the American Space Madrid, and new methods of fulfilling the Institute’s mission of cultural and educational exchange are all necessary if the International Institute is to renew itself and enjoy the ‘new life’ of its own institutional Spring.