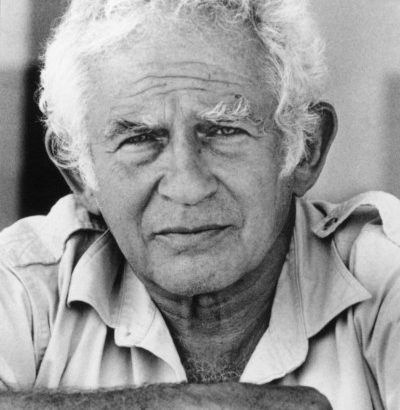 Our last story of the 2014-2015 cycle is Norman Mailer’s “The Language of Men,” published in Esquire magazine in 1953. This story closes not only our annual cycle, but also the sub-cycle of our last three texts, all of which (starting with Twain’s “The Californian’s Tale” and continuing on with Hemingway’s “Hills Like White Elephants”) are stories written by men about gender, masculinity and femininity, in some form or another. They also all deal heavily with language, and the ways in which language expresses, determines, and inhibits our notions of gender and identity.

Mailer’s notorious macho-driven bravado, both in his personal life and in his writing, has forever associated him in the popular mind with Hemingway, and comparing the two stories here presented gives us an, I would argue, informed snapshot of their respective styles. Whereas “Hills Like White Elephants” was almost impossibly sparse, “The Language of Men” is narratively abundant with detail and judgement, relayed from our omniscient narrator. The object of that judgement is Sanford Carter, a soldier serving out his time in Japan during the anti-climactic closing months of World War II. Carter is a delicate and insecure man, seemingly poorly equipped for both the rigors and the tedium of Army life. However, he is obsessed with proving himself by gaining the respect of his fellow soldiers. The story documents his attempts to do so from his post as an Army cook, a position he initially disdains, then comes to love, then finally regards with the same kind of bitter ambivalence he seems to see every other aspect of his life.

It isn’t necessary to know anything about Mailer, or Hemingway, to enjoy and discuss this story, but it helps. Mailer’s early career, defined most profoundly by his novel The Naked and the Dead from 1948, was heavily influenced by his Army experience. Whereas the novel deals more directly with traditional wartime encounters, “The Language of Men” gives us a wholly distinct perspective of a soldier’s experience. Mailer served as a cook in the Philippines, where the novel is set, so there are elements of biography in both.  However, because this story recounts one man’s struggle to ingratiate himself to his Army brethren, in close and sometimes excruciating detail, while completely ignoring the larger panorama of the war except insofar as it applies directly to our protagonist’s life, we are treated to what seems like a uniquely honest appraisal of the type of psychological effects Army life can have on men who have difficulty getting along with other men.

Here, just as in “The Californian’s Tale,” we have a story without women, yet just as in Twain’s story the gendering of tasks and roles continues regardless. Women, or at least femininity, seem to haunt Carter in everything he does. As you read, pay special attention to allusions made towards married life and domesticity, and think carefully about what they mean. Why is it so difficult for Carter to find his niche in the Army? What is it about the language of men that he doesn’t understand? What does that phrase mean? This story has a lot to say about the different roles that emerge in groups of strangers, and the ways those roles are empowered or ridiculed by the military. It also says a great deal about the historical place and time in which it was written, and the deep fear of emasculation that lurked within every American boy, especially those serving abroad. Perhaps another question to consider before next week’s meeting is: how much have things changed since then?

See you next Tuesday, and happy reading.