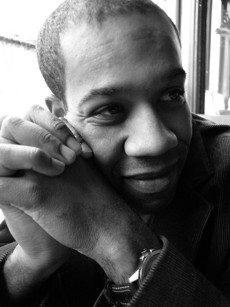 Gregory Pardlo, recent winner of the Pulitzer Prize for poetry, is the featured poet for the final session of our Poetry Reading Group.  And, although this session will be the last one before we all retreat into summer vacation, you will be pleased to know that Pardlo will be visiting the International Institute on the 23rd of July!  To get you in the mood for his visit, listen to an interview with Pardlo here: http://www.pbs.org/wnet/tavissmiley/interviews/pulitzer-prize-winning-poet-gregory-pardlo/

Pardlo’s “Wishing Well” (2015) locates us in contemporary, urban America, in New York City, just outside the Metropolitan Museum of Art – “the Met,” as it’s commonly referred to by New Yorkers – to be precise.  Indeed, the word “urban” has been used to describe the language of Pardlo’s poetry, something that distinguishes it from the other poems we have read in previous sessions.  The language of Walt Whitman’s “O Me! O Life!” borrows its the rhythms from the Psalms; and in Allen Ginsberg we hear echoes of Whitman, despite the occasional four-letter word Ginsberg likes to throw in for added shock value.  Certainly Williams Carlos Williams’s language cannot be considered urban, concerned as he was with elevating the vernacular of country folk into poetic language.  And yet, that concern to incorporate the vernacular, the rhythms and characteristics of everyday speech is also present in “Wishing Well:” “Son,” “dawg,” “hotbox,” “ain’t.”  Pardlo’s use of these colloquial, slangy words gives the poem a kind of edgy urgency that is characteristic of the street-life and urban culture of a city like New York.  We’ll talk about this language on Tuesday.  In the meantime, feel free to do a little dictionary digging to find out the meaning of those words.  (I recommend going to www.urbandictionary.com, although bear in mind that the definitions are written by volunteer editors and site visitors, and not language specialists per se.)

Language choice serves another purpose in “Wishing Well;” and Pardlo’s poem is unique among all the poems we have read for another reason:  it is a narrative poem, that is, a poem that tells a story.  Thus, Pardlo is not simply concerned with replicating the rhythms of speech into his poetry, with what we might consider the linguistic function of poetry, but also in using language to create narrative spaces for people to step into.  Language sets the scene, introduces the characters, and takes us through the action of the poem, and to understand the story that is being told in “Wishing Well,” we need to start with the title itself.  “Wishing Well” is a play on words.  A wishing well is a well or pool of water where you can drop a coin to make a wish (i.e., un pozo de los deseos).  “To wish someone well” is an idiomatic expression which means “to express a desire for someone else’s well-being.”  Understanding this double-meaning is key to understanding the emotional trajectory of the poem, for this poem can also be considered “urban” in the sense that it is a poem of movement, of energy.

The speaker of the poem goes on a journey, and just as he must take the hand of the stranger to do so, so do we, as readers, allow ourselves to be taken by the hand of the poet as he shares his journey with us.  We can even play with words ourselves by saying that “this poem moves.”  It moves through the action of its own story; we can plot the action of the poem along a line, one point after another.  But the poem also moves us.  Language gives this poem it’s particular punch, provides the emotional undercurrent or depth of the story, communicates the emotional journey of the speaker.  This is when we remember that the language of Pardlo’s poems has been described as “simultaneously urban and highbrow…specific and universal.”  Certainly, although at first he is locked in his own world, “aloof” and “truculent,” the speaker of “Wishing Well” is not concerned with the private, inner landscape of the confessional mode.  The speaker is sitting beside a fountain on a busy city street, apparently minding his own business, but in reality open to the public and available for any stranger who wants to approach.  A stranger does approach, and it is in the ensuing encounter that two worlds collide.  We are privileged to be there in the aftermath when it seems very much that the speaker has something to confess, or perhaps simply to share.

On Tuesday we’ll spend some time analyzing the language of the poem as well as its narrative trajectory.  As you read, think about the journey you are being taken on.  How does that journey move?  With a comfortable flow?  Like a rollercoaster?  How would you feel if you were in the speaker’s place?

Happy Reading, and see you on Tuesday,