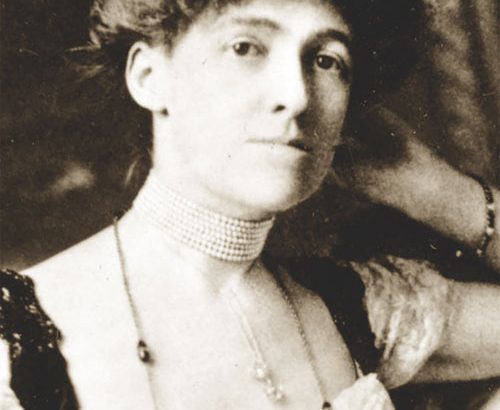 This month’s story is Edith Wharton’s “The Angel at the Grave,” first published in Scribner’s magazine in 1901. The story relates, among other things, the passage of a major literary figure’s legacy from one of universal acclaim to the dustbin of history, an obsolete relic from a forgotten past. Perhaps some of you felt as you read that Wharton, with her ponderous sentences and somewhat melodramatic descriptions, is due the same fate. But if you manage to pierce the outer shell of its style, what is revealed is a story about dependence and independence, self-definition and suffering, all universally human experiences, and all presented by a canonical American author who would have no doubt appreciated the irony of her own parallel diminishment in the face of evolving trends and changing times.

This is not to say that Wharton is no longer read, since that is certainly not the case. And her stature as a guiding voice in American letters is unassailable; though she is often celebrated as a woman writer before all else, her work warrants the attention it has received because of its own merits, not because of her gender or her time. This fact is especially relevant when considered in conjunction with the story before us: here we have a powerful and near-mythical literary figure, Orestes Anson, whose voice is lost because his ideas were outpaced by history, and because his persona was not dynamic enough to compensate for it. This is the conclusion our protagonist, Paulina Anson, his grand-daughter, reaches, in any case. Without any life to support them, be it the old man’s or Paulina’s own, Anson’s great works, his life’s work, are soon forgotten.

“The Angel at the Grave” is Paulina’s story, and, in some crucial ways, it reflects Wharton’s own. The author was born into the bosom of New York high-society, received a top-notch education, traveled extensively, and cultivated friendships with the cream of society on both sides of the Atlantic. Yet it was precisely because of her status that Wharton was prohibited from, among other things, reading novels until she was married, or publishing under her own name in spite of great success at a very young age. Her identity as the daughter of a prestigious family gave her incredible advantages, but it also kept her from flourishing artistically for much of her early life.

Paulina also lives a life defined by this paradox of liberation and entrapment, since she is free to roam, intellectually at least, among the towering heights of her grandfather’s catalogue, and through the vast continents of thought that fill his library. But because she understands her grandfather, who she never met, in a way that the rest of her family does not (that is, she can appreciate his genius), she is doomed to serve him. She dedicates her life to his work, and is haunted, it seems, by a lingering question: was it worth it?

Ultimately this question is answered in the positive, as Paulina’s labors are validated by a dramatice twist of fate. But her suffering is not so easily swept aside, and is given greater depth when we reflect on the significance Wharton’s own experiences add to our interpretation. For both Wharton and Paulina, privilege is a blessing and a curse, fundamentally guided by gender. Regardless of fortune or intellect, a woman still finds herself trapped, in the service of ideas that, if she’s lucky, she will realize are archaic and worth forgetting before it’s too late.

More details about the activity at: www.iie.es/agenda