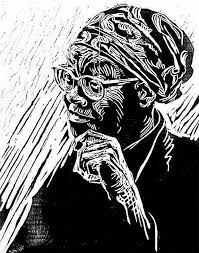 ENGLISH READING CIRCLE ON POETRY AND PROSE POETRY – POEM OF THE MONTH ANALYSIS: “A SUNSET OF THE CITY” BY GWENDOLYN BROOKS

This month’s poem is “A Sunset of the City,” by Gwendolyn Brooks.  Brooks was a prolific and accomplished poet, and was the first black writer – male or female – to win the Pulitzer Prize for poetry, which she was awarded in 1950 for her second collection of poems, Annie Allen.  In addition to poetry, she wrote books for children, a novel, and a two-volume autobiography.  She served as Poetry Consultant to the Library of Congress and Poet Laureate to the State of Illinois.  Critics have often observed Brooks’s commitment to exploring the theme of racial identity, as many of her works deal with inequalities of class and race, and the damaging effects of prejudice.  In particular, it seems that poetry was a medium through which Brooks gave a voice to the black, urban poor; and many of those voices that speak from her poems are the voices of black, poor, urban women.

“A Sunset of the City” is no exception, as our speaker tells us she is a woman “no longer looked at with lechery or love.”  This is a striking juxtaposition to open the poem with, and it leaves us wondering, which is it that our speaker misses most?  The next line adds another layer of complexity to our speaker, as it evokes not simply a tender ache for the woman herself – seemingly left behind by those she cares for – but her own ache as a mother of grown children, a mother who has perhaps kept the “marbles and dolls” somewhere in the attic, where they serve as little souvenirs of youth.

This is a woman, then, whose awareness of the passage of time is matched by an awareness of all that she has experienced throughout the years of her own life.  At times her voice seems to expand beyond her own body to serve as the voice of the very city in which she lives.  This is more than a simple identification of the woman with the city.  It is as if, through the woman, the city speaks of the ways it has been changed by the passage of time.  Here, then, the sons and the daughters who have put away their childish things are now no longer simply the sons and daughters of a singular woman, but instead have become all the young men and women who have ever left a city for a better life, a better job or a better opportunity elsewhere.   In this sense, it is the city itself that mourns the changes that have come through the years, and it is the woman who is sensitive enough to pick up on this sense of loss in the air.

If it seems that the passage of time has made her a creature of habit, a woman “who hurries through her prayers,”  she isn’t in that much of a hurry to get to the end just yet.  Our woman faces the sunset of her life with a sense of observation, of contemplation; she has a decision to make yet.  It is the last two lines of the poem that leave me perplexed, perhaps owing to the use of the verb “muff,” which can mean “to do something badly” or, more intricately speaking, “to spoil a chance to do something well or achieve something.”  Is she talking about life, or about death here?  I’m very interested to hear your thoughts on Monday.  Until then, get out into the city, and enjoy a sunset or two.

P.S. There should be an audio file under the title of the poem on the poetryfoundation.org page.  If there isn’t, click here to listen to a recording of the poem: “A Sunset of the City” audio.