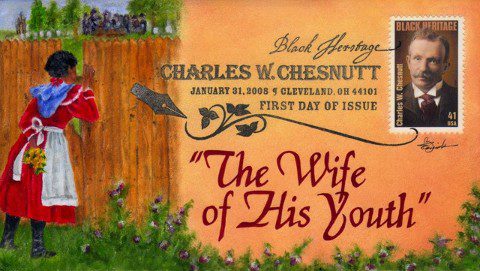 ENGLISH READING CIRCLE – SHORT STORY OF THE MONTH ANALYSIS: “THE WIFE OF HIS YOUTH” BY CHARLES W. CHESNUTT

This month’s story is Charles W. Chesnutt’s “The Wife of His Youth,” first published in The Atlantic in 1898. Chesnutt’s most celebrated stories deal heavily with the nature of racial and social identity in the Reconstruction and post-Reconstruction era, from 1865 to around 1900. As a light-skinned African-American (he was seven-eighths white), Chesnutt’s self-identifying as black was a choice that put him in a vulnerable position during his life, but which ultimately helped guide him and his work to notoriety in the late 20th century, particularly following the Civil Rights movement of the 1960s. He was an active member of the National Association for the Advancement of Colored People, and a vocal critic of laws he deemed discriminatory.

He was also a master storyteller and a subversive artist capable of crafting a story dense with multiple layers of embedded social and racial conflict, criticism, and satire in six short pages.  Rather than address race as a simple question of black versus white, “The Wife of His Youth” delves into the consciousness of the mixed-race community in the North, an approach that was unprecedented at the time. The story’s main character is Mr. Ryder, “dean of the Blue Veins,” an exclusive society for African-Americans in an unnamed Midwestern town. Mr. Ryder in particular and the Blue Veins more broadly are presented as bastions of black “high culture,” which in this context means, essentially, white culture. Mr. Ryder’s predilection for bourgeois manners and the poetry of Alfred Lord Tennyson supports this reading, as does Ryder himself, when he admits that, between the white world and the black one, association with the latter would represent “a backward step.” His affections for and desire to wed Mrs. Molly Dixon spring purely from the step forward in the “upward process of absorption” it would represent.

But fate intercedes when Mr. Ryder is visited by one Liza Jane, a wholly black and unrefined former slave on a mission to find her husband, Sam Taylor, a “merlatter” (mulatto) freeman who fled the plantation on which they lived when he learned he was to be sold, in spite of his status. For twenty-five years Liza has wandered, never losing hope that she would one day find her man. At the society ball Ryder organized in honor of Mrs. Dixon later that night, he relates the story of Liza Jane, presenting her as an example of loyal womanhood, as well as an emissary from a shared past many of the Blue Veins seem determined to distance themselves from. He poses to the assembled guests a series of “hypothetical” questions that frame Liza’s story as a test of moral integrity for her “hypothetical” husband – who, we are soon to learn, is not hypothetical at all. Should this husband acknowledge, after years apart and a new identity between them, the wife of his youth as such? Should he claim her, and make his true self known? Mrs. Dixon and the society as a whole are quick to respond: he should, undoubtedly. Mr. Ryder accepts their judgment, and goes to fetch Eliza, whom he introduces as the wife of his youth. In so doing he implicitly reintroduces himself, and accepts the identity he was so committed to denying.

Chesnutt blended a great deal of sociological background into his depiction of the worlds of black Americans at this time; he was particularly skillful in his use of eye dialect, which transcribes speech as it is said, imperfections and all. Liza Jane provides us with a challenging example of this type of writing. But rather than get discouraged with trying to decipher her tale, I suggest you try sounding out the words instead, and listen for the “proper” English proxy that corresponds to her dialect. The contrast between Ryder’s speech and that of the wife of his youth is a jarring one, and revealing of the vast divide that separated these intra-racial worlds at the time. Ryder’s dual mindedness reflects the perilous psychological reality of those trapped between identities, and the lengths they will go to pursue, as Ryder himself calls it, “self-preservation.” But what self, ultimately, is being preserved? And for what end?