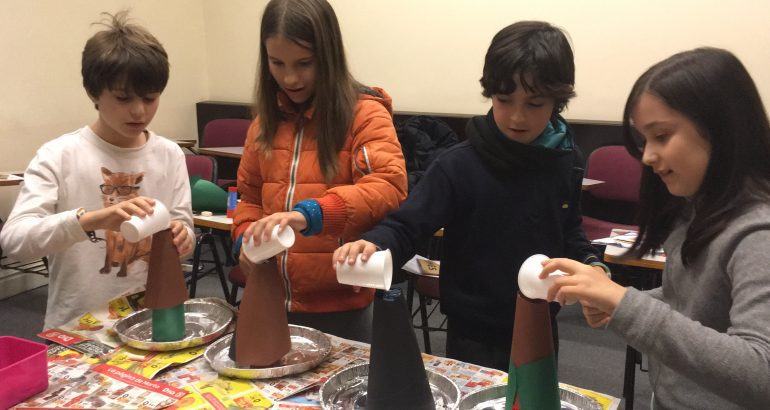 From the Civil Rights Movement to Super Volcanoes: Kids Culture Club at IIE

We’re already mid-way through the second trimester of Kids Club 2, and the topics we’ve explored have been quite diverse.

As the first day of class fell on January 15th, in honor of Dr. Martin Luther King Jr.’s birthday, we learned about his contributions to the American Civil Rights Movement, then watched the 1999 film Our Friend Martin, loosely based upon his life.

During the following week, we became musicians! Using Anna Kendrick’s “When I’m Gone” (aka “The Cups Song”), we explored various ways in which percussion sounds could be produced without traditional instruments. This was a lot harder than it looked, but we improved quite a bit after consistent practice and with the help of a few YouTube tutorials.

As the trimester moved along, we switched gears a bit and focused on science and geography for a day. After learning about the potential negative impacts of “super volcanoes” in the United States, we created our own models using water bottles, baking soda, dish soap, food coloring, and vinegar. The results were messy, but it was so much fun!

As February was Black History Month, we began to explore African Americans’ contributions to the social and cultural fabric of the U.S. Students – in collaboration with the other Kids Club and Teens Club groups – were tasked with re-interpreting and re-creating a music video based upon a song by an African American musician. They chose Bad by the “King of Pop” himself, Michael Jackson!  The students worked hard to develop a concept, create storyboards, and learn filming and editing techniques using iPads and iMovie.

Without a doubt, this has been the highlight of this winter trimester, and we can’t wait to share all of our efforts with you!