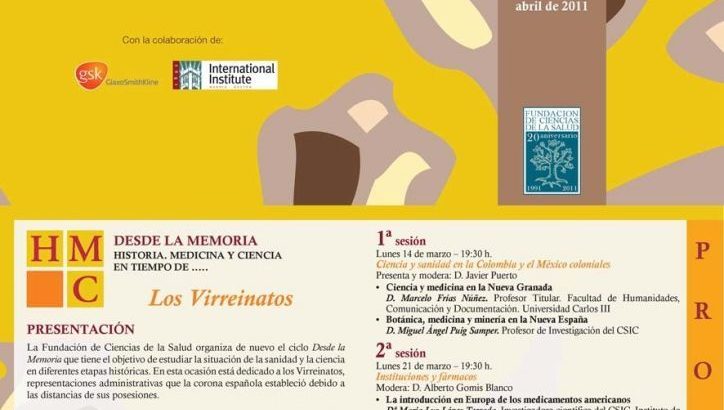 Conference on "Travellers and scientists" within the cycle of conferences "From memory: history, medicine and science in the time of the Viceroyalties"

Next Monday, March 28 at 19:30 p.m. The third session of the cycle of conferences "From memory: history, medicine and science in the time of the Viceroyalties" organized by the Health Sciences Foundation will take place in the Auditorium of the International Institute.

The session called "Travellers and scientists" will be presented and moderated by Mr. Miguel Ángel Puig Samper and will include the following communications:

-“Travellers and scientists in the Caribbean (XNUMXth and XNUMXth centuries)”. In charge of Mrs. Consuelo Naranjo Orovio. Research Professor at the CSIC and Director of the History Institute of the CCHS-CSIC.

-“Science and health at the borders: the Amazonian world”. Given by D. Manuel Lucena Giraldo. Scientific researcher at the CSIC Madrid.

The Health Sciences Foundation once again organizes the cycle "From Memory" which aims to study the situation of health and science in different historical stages. On this occasion it is dedicated to the Viceroyalties, administrative representations that the Spanish crown established due to the distances of its possessions.

In the case of the Indies, the Viceroyalties of New Spain, Peru, New Granada and the Río de la Plata developed from the XNUMXth century. Although some have been known to the public for their magnificence, less is known about the scientific and health advances that were carried out in their territories. Historians of science will analyze these advances in an expeditionary trip around what today constitutes the Latin American and Caribbean regions.

From memory: history, Foundation Health Sciences, medicine and science in the time of the Viceroyalties
Share