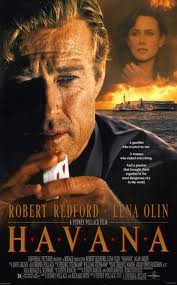 “Jack Weil (Robert Redford), a professional gambler, is in Havana with the intention of playing the poker game of his life, when General Batista rules the island. Jack lives on the fringes of politics, but he quickly realizes that the city is a veritable nest of spies, secret police, and Castroist revolutionaries.”

Authorized for all audiences