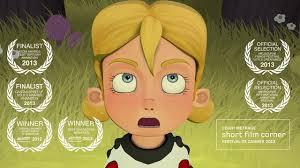 Monthly meeting in English for boys from 13 to 15 years old to write and act using short films and the English language.

One Monday a month at 17:30 p.m. in the library of the International Institute.

Required level of English: intermediate-high / advanced (level test can be requested from library@iie.es).

The activity will be led by Christine Jones, professor in the English department of the International Institute.

Given the capacity limitation (15-20 participants) all those interested who want to participate must send a registration message to library@iie.es. The activity is part of the services offered to library members and they have priority in registration.

Carrying out the activity by non-members has an associated symbolic cost of €3 in a separate session. Tickets can be purchased in advance at the library counter the same week the activity is held up to 15 minutes before it starts.

“On a lonely alien planet shrouded in mystery, an ominous beast guards a powerful treasure. One day he receives an unexpected guest – A seemingly innocent girl crash lands on his world from him. The two will forge an unusual friendship, and teach one another that looks can indeed be deceiving.”