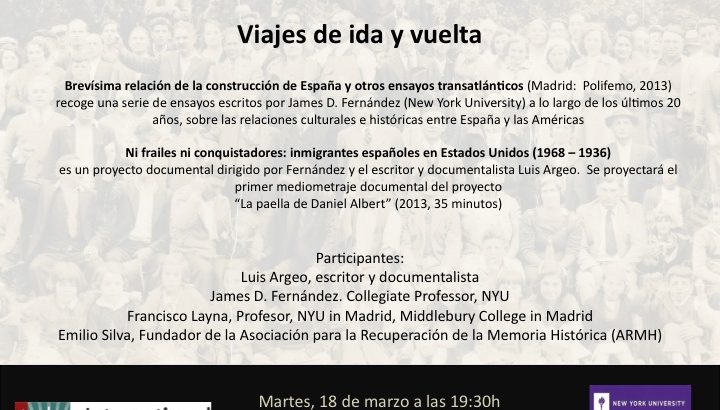 “Round trips”: presentation of the new book and documentary project by James D. Fernández

Next Tuesday, March 18 at 19:30 p.m. In the International Institute under the name of "Round Trips" will take place the presentation and dissemination of a new book and documentary project by James D. Fernández (New York University).

The book "Brief relationship of the construction of Spain and other transatlantic essays" (Madrid: Polifemo, 2013) collects a series of essays written by James D. Fernández over the last 20 years on the cultural and historical relations between Spain and the Americas.

The documentary “Neither friars nor conquerors: Spanish immigrants in the United States (1968-1936)” is a documentary project directed by Fernández and the writer and documentary filmmaker Luis Argeo. The first medium-length documentary of the project "Daniel Albert's paella" (2013. 35 minutes) will be screened.

They will participate in the event:

Emilio Silva, Founder of the Association for the Recovery of Historical Memory (ARMH).

The event has been organized by the International Institute in collaboration with New York University in Madrid.