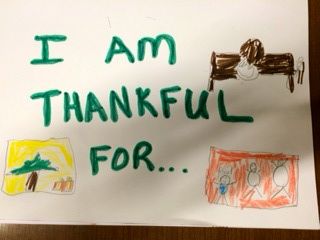 It was a busy first trimester in Jennifer's group of Kids' Club! The month of October was filled with Halloween activities, culminating in pumpkin carving for Jennifer's class right before the holiday. Some more KC friends from Jean's group joined in that day. The poem of the month was “Five Little Pumpkins,” and the kids got to take turns being the different pumpkins and also being the light helper who got to quickly turn off the lights for the grand finale of the poem:

sitting on the gate

The first one said,

The second one said,

“There are witches in the air!”

The third one said,

The fourth one said,

The fifth one said,

And out went the light.

And the five little pumpkins rolled out of sight!

In November the festivities continued with talks about Thanksgiving and all that everyone was grateful for. The kids made a class book titled, “I Am Thankful For…” in which each child added his or her page to her and illustrated it. Two friends helped to decorate the cover. The class will continue to read it throughout the year.

The group also learned another counting poem, although this one about (you guessed it!) turkeys:

One waddled away, and then there were four.

Four little turkeys under a tree.

One waddled away, and then there were three.

Three little turkeys, with nothing to do.

One waddled away, and then there were two.

Two little turkeys, out in the sun.

One waddled away, and then there was one.

One little turkey: Better run away!

Soon it will be Thanksgiving day.

Kids' Club also talked about fall and began the Readers' Tree, filling it with fall colored leaves marked by the books that kids have read in English at home as well as those they read together in class. They continued filling the tree in December, and you should now be able to find the tree in the library. There are even some extra leaves there for adding more titles if the kids would like to do that; just ask the librarians.

December was a short month because of all the holidays. Kids' Club had a great time decorating cupcakes, and also talked about the holidays celebrated in our group, both Christmas and Chanukah. The kids learned songs for both and got to watch a couple of videos, too!