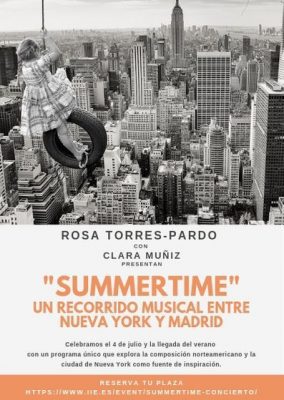 We will close the concert with a Spanish wine in our garden with a raffle of North American products from Taste of America.

A musical journey between New York and Madrid

that takes the city of New York as a source of inspiration.

We appreciate your registration to facilitate the organization of the space.

The pianist Rosa Torres-Pardo, together with the actress and singer Clara Muñiz, will perform a series of pieces that pay homage to the city of New York and its legacy as a source of inspiration for national and international composers who have been part of the history of Manhattan , as a unique center for artistic creation. With pieces by North American, Spanish and Argentine composers, the program explores the comings and goings between American composition and musical creation that was born in large Spanish-speaking cities.

The program will begin and end with works by American composers John Adams and George Gershwin. Meanwhile, we will take part in a journey between Buenos Aires and Madrid with pieces inspired by New York composition, including works by the fathers of Argentine tango Alberto Ginastera and Astor Piazzolla and the Spanish composer Isaac Albéniz. We will arrive at the present through the musical innovation of composers such as Ricardo Llorca and William Kingswood, artists adopted by New York and the international musicians and artists who develop their work in that great city. The program will also include a reading of the poem "Mannahatta" by the poet Walt Whitman, whose bicentennial of his birth is commemorated this year.

Rosa Torres-Pardo She is one of the most renowned Spanish pianists. She obtained the Extraordinary End-of-Career Award at the Madrid Royal Conservatory of Music. After studying in Spain with Joaquín Soriano and Gloria Olaya, she furthered her studies with María Curcio in London, Adele Marcus at The Juilliard School of Music in New York, and Hans Graff in Vienna.

He has received various distinctions and awards throughout his career, such as the Masterplayers International Piano Competition in Lugano (Switzerland) or the Isaac Albéniz medal for the interpretation and dissemination of Iberia (an award he received together with Alicia de Larrocha). He made his debut at the Teatro Real in Madrid in 1987 with the German Philharmonie Hungarica orchestra under the baton of Jean-Bernard Pommier, performing Prokofiev's Third Concerto.

In recent years, Rosa Torres-Pardo has collaborated on various interdisciplinary projects, such as the musical film "Iberia", by Carlos Saura, "Albéniz, the color of music" by José Luis López-Linares or "La vida rima", with the singer Ana Belén. She recently premiered in Japan and Spain the documentary about Antonio Soler entitled “Una rosa para Soler”, directed by Arantxa Aguirre. She is currently developing a new documentary about Enrique Granados, also under the direction of Arantxa Aguirre.Rosa Torres-Pardo has been chosen among the Top 100 Leading Women in Spain in 2017, she is a Resident Artist of the New York Opera Society, a member of the board of trustees of the Cervantes Institute and National Music Award 2017.

Clara Muniz is a Spanish singer and actress. She began her studies in drama, violin and piano in York, UK. She then studied music at the Tech Music School in London and later she entered the Instituto de Transformación de las Artes Modernas de Madrid (TAI), where she studied dramatic arts.

He has participated in poetry recitals and music festivals in Spain and Portugal. She starred in “The peepshow of ego”, an experimental short film nominated for the independent film festival in New York. Last summer she starred at the Teatro Real in Madrid in the cantata "Somos Naturaleza" by Sonia Megías and Eva Guillamón. Her latest performances include the IKFEM Festival in Tui with the show 'Desconcierto' with the flamenco singer Rocío Márquez and the 'Homenaje a Debussy' with Rosa Torres-Pardo. Her last appearances have taken place at the Teatro de la Zarzuela, for the concert “Música entre amigos” or the recent debut of “La verbena de la Paloma” with the Zarza Project.