“The stories of a legacy. Free Institution of Education, Republic and Exile in the Ritama Troyano de los Ríos Archive (1905-2004)”

They will participate in the event Ritama Muñoz-Rojas, journalist and writer and Soledad Fox Maura, writer and Professor of Literature, Williams College (USA)

Ritama Trojan of the Rivers (1905-2004) He belonged to a family linked to the Institución Libre de Enseñanza. From her childhood, she lived with people who had assumed and carried out a commitment to improve people's lives through an educational and cultural project. She was the niece of Fernando de los Ríos, a socialist intellectual who was Minister of Justice and Public Instruction in the Second Republic, Spanish ambassador in Washington during the civil war and exiled in New York at the end of it; she is the granddaughter of Manuel Troyano, one of the most respected journalists of his time, especially known for his articles in El Imparcial; She was also a family of Francisco Giner de los Ríos, Ríos Rosas or Andrés Mellado. She married Carlos Fernández Casado, a civil engineer, whose work has been essential for the renovation of Spanish engineering in the XNUMXth century.

Ritama Troyano de los Ríos was educated at the Instituto Escuela. In her youth, she actively participated in the cultural life of the twenties, especially linked to the environment of the Institución Libre de Enseñanza: Residencia de Estudiantes, La Barraca, Residencia de Señoritas, Universidad Internacional de Santander, Sierra de Guadarrama. She frequented the environment of the generation of 27, having relationships with painters, poets, musicians. It is worth highlighting her relationship with Federico García Lorca and with all of her family. Federico's brother, Francisco García Lorca, would marry his cousin Laura de los Ríos in his exile in New York. In her youth, Ritama Troyano de los Ríos was a Spanish teacher at Lucton School, England, a country where she arrived accompanied by her uncle Fernando de los Ríos and Federico García Lorca, who then continued on to New York.

Over the years, she has been saving, compiling and preserving representative testimonies of the time in which she had the privilege of living. Thus, he has left us a legacy made up of different types of documents, such as letters, postcards, photographs, magazines, brochures, catalogues, programs or family documents of all kinds that now constitute a valuable testimony on how an innovative project is generated to transform the society through education and culture, how it starts, how it bears fruit and the final outcome, which is war and exile. 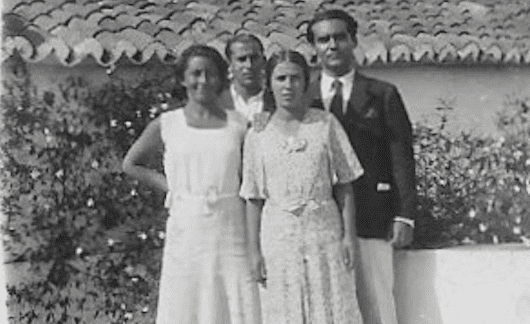