An encounter with Carl Adamshick

Join us for an encounter with

An evening of poetry

at International Institute May 19th,  7,30pm

Born in Toledo, Ohio, in 1969 Carl Adamshick grew up primarily in Harvard, Illinois.

Adamshick’s debut collection, Curses and Wishes (Louisiana State University Press, 2011), was selected by Marvin Bell for the 2010 Walt Whitman Award. In 2012, the collection won the Stafford/Hall Award for Poetry from Literary Arts. About his work, Bell writes:

Reading these poems is like breathing fresh air. Carl Adamshick’s voice is instantly engaging. A sophisticated ear. A continuous feeling for measure. A clarity of complex feelings. The tactile and the mysterious. Emotion embedded rather than proclaimed. A subtle artistry. It is refreshing to read a poet who feels and thinks from inside sound and sense.

Adamshick is also the recipient of an Oregon Literary Fellowship from Literary Arts and has been featured in Poetry in Motion. His poems have appeared in numerous journals, including theAmerican Poetry Review, the Harvard Review, and American Poet.

The poet Dorianne Laux describes Adamshick as someone who “has not joined the ranks of the MFA/PhD’s and has never attended a writer’s conference or residency.” 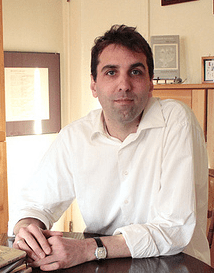