THIS FILM IS IN ENGLISH WITH ENGLISH SUBTITLES

“Home of the Brave” (http://www.homeofthebravemovie.com) reveals the inspiring life of Viola Liuzzo, the Detroit housewife and mother of 5 killed in the civil rights movement.

Directed by Academy-Award nominee,  Paola di Florio, the documentary film Home of the Brave tells the little-known story of civil rights heroine Viola Liuzzo, the only white woman killed in the civil rights movement. Fifty years ago, Viola was murdered just hours after her participation in the Selma to Montgomery marches. She was shot by members of the Ku Klux Klan while shuttling protestors to the airport following the historic marches.

Organized by #blacklivesmatter participants and other human and civil rights organizations with representation in Madrid, the film screening will be followed by a live Skype session with the filmmaker.

“Home of the Brave” Documentary Awards and Honors listed below: 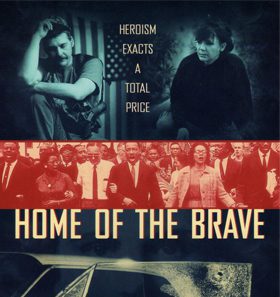