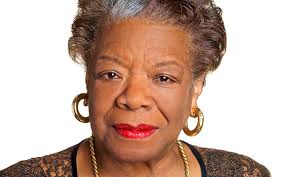 ENGLISH READING CIRCLE ON POETRY AND PROSE POETRY – POEM OF THE MONTH ANALYSIS: “ON THE PULSE OF MORNING” BY MAYA ANGELOU

In our final poetry session before summer vacation, we finish with a poem about new beginnings, Maya Angelou’s “On the Pulse of Morning.”  Angelou read this poem at the inauguration of President Bill Clinton 1993, and the critics were quick to point out how the themes of the poem mirrored the themes of Clinton’s acceptance speech, the inclusiveness of American society being one of the most prominent points of similarity between the two.  Coming to this poem more than twenty years later, I am struck first and foremost by the oratorical nature of the poem: this is, as it was intended to be, a poem that is best understood by being read out loud.  (Listen to Angelou read the poem at the Inauguration here.)  The Rock, the River, and the Tree – personified by Angelou’s naming them in capital letters – do indeed sing and call to us, and their words demand an answer.  As Angelou says, “There is a true yearning to respond to / The singing River and the wise Rock.”  This, I think, is where the radical possibility of inclusivity begins to emerge.  The speakers of the poem call out by name, one by one, the different nationalities, ethnicities, tribes, and religions that have helped make America the paragon of diversity it is today.  Through this act of naming, this effort of inclusion, we are not simply being acknowledged and affirmed, although that does happen.  We are being called upon to come together and join in the remaking of the American Dream.  This choice to include ourselves in the new world that is dawning around us is perhaps the most enduring expression of the freedoms that so many have sought throughout America’s history.  “On the Pulse of Morning” suggests that our country is great, not because we glorify or deny its past, but because we are capable of facing that past “with courage” and moving beyond it into the future.  And for all the complicated histories we inherit from our ancestors, their journeys, struggles and wars, Angelou reminds us that the greatest of futures begins with a simple “Good Morning.”

What do you hear in the singing River?  What call do you hear from the wise Rock?  What words does the eternal Tree speak to you?   I look forward to hearing your responses to this poem on Monday.